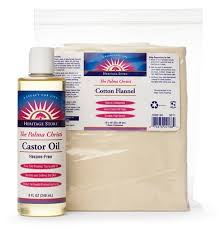 What is Castor Oil?

Castor oil is the oil extracted from the castor bean plant and is widely used for its healing properties when it is used externally.  The use of castor oil is found in medical references dating back to ancient civilizations.  Among the documented cases where castor oil packs were used successfully were conditions of abscess, bursitis, constipation, appendicitis, whip lash, muscle sprains, low back pain, abrasions and lacerations, infected puncture wounds, and fibroid tumors.  It was used for arthritic conditions, local infections and post surgical care for its analgesic (pain) and anti-inflammatory benefits.  In fact, a recent study showed that castor oil was just as effective as using topical capsaicin to decrease pain and inflammation, as well as being less irritating to the skin.

How Does Castor Oil Work?

While it is not known exactly how castor oil works, research has shown that castor oil has a profound influence upon the lymphatic system and the autonomic nervous system.  As castor oil is absorbed through the skin it moves through the lymphatic channels stimulating the natural healing ability of the body to break up any congestion present.  Since the pain and swelling from injury is due to the interruption of lymph drainage in the affected area resulting in an accumulation of fluid, this action of castor oil on the lymphatics is what makes it a valuable therapeutic tool for the first aid.

Castor oil, applied topically will greatly reduce the pain, swelling, and discoloration due to soft tissue injury.  You can apply castor oil directly to the affected area or use a castor oil compress.  Continue treatment for up to 48 hours applying more oil as it is absorbed by the body.

Cover the wound with a castor oil compress.  Change dressing at least twice daily.  Continue until the inflammation is relieved.

For Chapped or Irritated Skin:

The emollient properties of castor oil makes it excellent for soothing chapped lips and dry or irritated skin.

Castor oil may be used for any non-penetrating injury to the eye.  It will help prevent bruising and bleeding resulting from a blow to the eye.  A few drops placed in the eye will bring almost immediate relief from the pain caused by snow blindness or a scratched eyeball.  When there is dirt or foreign bodies in the eye, castor oil will help these to the corner of the eye while protecting the eye from scratches.

Warmed castor oil dropped in the ear can lessen the pain caused by infection.

Typically, the castor oil pack is used 1-3 times/day in acute situations, and 1-3 times/week in more chronic situations.  Indications for use include liver cleansing, gall bladder inflammation, arthritis, chest colds, colitis, and other intestinal disorders, closed infections, pelvic problems, and other conditions.  It can also be used effectively for conditions like Raynaud’s, diabetic neuropathy, osteoarthritis, and rheumatoid arthritis.

Spread the castor oil directly on the affected area and cover with wool flannel.  This may be further covered with a towel, sheet of plastic, or old T-shirt to keep the oil from contacting clothing.  Castor oil does stain, so make sure you properly wrap your body to prevent this.  While a pack may be used in certain acute infections, it is then not advisable to use a heating pad with the pack during acute situations.

1.     Fold the flannel or wool cloth into 2-4 thicknesses, and a suitable size to cover recommended body area.

2.     Either soak the pack in preheated castor oil, or saturate the cloth with castor oil, and heat the castor oil pack in the oven on a cookie sheet at a low temperature (Don’t use your microwave oven, as you can too easily scorch the oil and pack.)  You want the pack very hot, but not hot enough to burn your skin.

4.     Place sheet of plastic over pack.  This is to prevent oil from ruining your clothing and linen.

5.     Place heating pad on top of plastic, and turn heating pad to medium, or to high if tolerable.

6.     Treatment should continue for at least 1 hour.  Longer treatments are not harmful, though it is not advisable to fall asleep with the heating pad on.

7.     To complete treatment remove the castor oil pack, and cleanse your skin with a solution of baking soda.  (1 teaspoon baking soda to 1 pint water).

8.     The pack can be stored in the refrigerator in a container.  It can be reused 20-25 times, after which it should be washed or dry-cleaned.

Take the Next Step!

To explore whether working together is right for you, you can schedule an initial consult or ask me a question below.

Make An Appointment Ask Me A Question

Find Out Which Of Your Hormones Need Balancing!

Using my expertise as a naturopathic doctor in natural medicine and therapies, I develop highly effective solutions that help my patients overcome underlying problems and restore the body to a balanced and optimal functioning level.

Want to learn more? Want to feel and look your best? Make an appointment and let’s get you started.